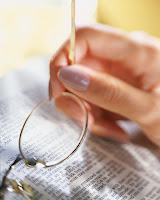 Discipleship Considered
As we enter 2010 let us return to our series on 'Discipleship'. We have already considered why we should become disciples:
1. For love of the Saviour.
2. To be worthy of the One who saved us.
3. To glorify God.
4. For the salvation of souls.
5. For the 'well done' of the Saviour.
6. For the victor's crown.
Now let us continue with the qualifications of discipleship.
A Disciple Must Have a Commission.
1. The General Commission
Under the initi 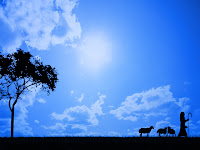 al phase of the Messianic mission of Jesus, those who were His disciples were sent out with clear instructions. "Go nowhere among the Gentiles, and enter no town of the Samaritans, but go rather to the lost sheep of the house of Israel. As you go proclaim the good news, 'The kingdom of heaven has come near'." (Matt. 10.5-7) And because they were representatives of Israel's Messiah they were equipped to perform the appropriate Messianic attesting signs, which they did.

After His resurrection, to accommodate the new circumstances, He revised their instructions. He commanded them to take the gospel everywhere, to the end that all people should have the opportunity to be saved. He instructed the eleven to go, teach and baptise all nations. The Revised Version of the Bible changes the word 'teach' to 'make disciples of'. His words, as they were given on another occasion (recorded in Mark 16.15), called for preaching the gospel to every creature. Preaching in His Name among all nations is the theme of Luke 24.47. Our Lord's last words before His ascension are recorded in Acts 1.8. They are, perhaps, the most famous missionary text in the Bible, and a command to bear witness in the power of the Holy Spirit to the ends of the earth.

The orderly progress of this testimony was to be in Jerusalem, where the apostles were at that time, then in the surrounding area and the adjoining region, and finally to the far places. The most comprehensive commission is found in Acts 26.16-18. Christ appeared to Paul for the purpose of making him a minister and a witness among the Gentiles. He was made responsible "to open their eyes, and to turn them from darkness to light, and from the power of Satan unto God, that they may receive forgiveness of sins, and an inheritance."

While the great commission was directed initially to the apostles of the Lord, we must believe that discipleship includes the injunction to preach the gospel of the unsearchable riches of Christ to everyone who will give us a hearing. If the Son of Man came to seek and to save that which is lost, and disciples are now His representatives, then we must follow in His footsteps and seek to win those who are lost. It seems self-evident that discipleship must take on board 'the great commission'.

Next time we will look at 'the particular commission' for individual disciples.

We now return to our series of blogs on discipleship. Here are a few more reasons why invidividuals may wish to embrace the path of service for Christ.

4. FOR THE SALVATION OF SOULS.

It seems redundant to say, but the spirit of the disciple must be in tune with the spirit of his/her Master. When Jesus said, "the Son of Man did not come to be served but to serve, and to give His life a ransom for many" (Matt. 20.28; Mark 10.45), He vocalised a burden for souls that reflected the heart of the Father. He also said, "the Son of Man has come to seek and to save that which was lost" (Luke 19.10). In a similar manner, when the disciple has a burden for souls, he/she truly reflects the heart of the Saviour and demonstrates that he/she is a true follower of the Master. Evangelists, whose specialised work is the salvation of souls, are one of God's gifts to the Church (Eph.4.11). Furthermore, all Christians are encouraged to do the work of an evangelist (2 Tim.4.5).

5. FOR THE 'WELL DONE' OF THE SAVIOUR

There is nothing quite as comforting as having the satisfaction of a job well done. Of knowing within yourself that you did your best and the result was as good as you could possibly have made it. If this is then endorsed by your peers, then deep joy; but if it is confirmed by the Saviour Himself; to have Jesus say, "Well done, good and faithful servant" (Matt.25.21,23), O what glory! Martin Luther wrote: "there are only two days in my diary' today and that day".

6. FOR THE VICTOR'S CROWN

Then there is this other aspect. Paul, illustrating his own path of discipleship wrote; "And everyone who competes for the prize is temperate in all things. Now they do it to obtain a perishable crown, but we for an imperishable crown" (1 Cor. 9.25). Then speaking at the end of his life, having completed his race, having finished his course, and having fought his fight, he also wrote; "Finally, there is laid up for me the crown of righteousness, which the Lord, the righteous Judge, will give me on that Day" (2 Tim. 4.8). James joined in with; "Blessed is the man who endures temptation; for when he has been approved, he will receive the crown of life which the Lord has promised to those who love Him" (Jas.1.12). And Peter; "and when the Chief Shepherd appears, you will receive the crown of glory that does not fade away" (1 Pet.5.4). Leaving aside what these individual crowns mean, it is clear that they are not simply given to those who are believers and little more. Crowns reflect either a position of authority or victory, and these described by the New Testament writers are for those who have been faithful in service. Jesus, our fore-runner and example, was crowned when He completed His course. The writer to the Hebrews summed it up, "... we see Jesus, who was made a little lower than the angels, for the suffering of death crowned with glory and honour" (Heb.2.9)

Next time we will look at the disciple's commission.
Posted by Mountjoy at 11:56 AM 0 comments 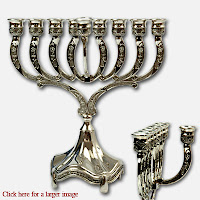 After the death of Alexander the Great, the Greek empire was divided among his generals. Palestine was first administered by the Ptolemies of Egypt, but later they were under the rule of Syria, which was then ruled by the Seleucid dynasty. These followed a policy in which all nations under their control should be fully assimilated into their empire. One king, Antiochus Epiphanes, aggressively pursued this policy, and sought to achieve it by the destruction of local culture and religion. The observance of Jewish laws and customs was made illegal, and the Temple in Jerusalem was made into a pagan shrine.

In the years 165-163 B.C. a revolt was incited by a priest in Modin called Mattathias. Led by his son Judah, called Maccabee (from the Hebew meaning 'hammer'), the revolt was a great success. Antiochus was defeated and all the lands of Judah reclaimed. Although Israel went on to exert increased political power in the region for some one hundred years, the country fell to the Romans in 63 B.C.

Hanukkah, which means 'dedication' is a remembrance of the Maccabee's victory and the cleansing and rededication of the Temple in the aftermath of the revolt. In the Talmud, the story is told of a miracle that took place when a single jar of pure oil (that was needed to light the Menorah in the Temple) lasted for eight days, when under normal circumstances it would have only lasted for one day. It is this that is the background for Hanukkah being known as the festival of lights, and gives rise to the lighting of the hanukiyah, the eight day lamp, or eight branched menorah.

The Customs of Hanukkah

There are two main aspects to the Hanukkah lights. The first, 'pirsumei nisa' means to publicise the miracle, which requires the lights to be put in a place where they can be seen, such as in a window.

The second, 'leshem mitzvah' means that whatever is done to fulfil a commandment should not be used for any other purpose. This means the candles that are lit for the exclusive purpose of the festival are not to be used as a light source. Thus the eight candles are lit with another candle, the 'shamash', which is kept apart from the others.

The order of the lighting of the candles was a matter of debate. Rabbi Shammai recommended that you light all eight candles on the first day of the festival, and then reduce the number by one each succeeding day, whereas Rabbi Hillel suggested that you begin with one candle on day 1, and then two on day 2, and so on. Generally, this is the order that is followed.

The candles should burn for at least 30 minutes. If a candle goes out, there is no legal obligation to relight it, but it is considered a good thing to do, i.e. it is 'hidur mitzvah', an enhancement of the mitzvah.

There are blessings to be said at Hanukkah. They are as follows:

Blessed are You, Lord our God, king of the universe, who has sanctified us with His commandments and commanded us to kindle the light of Hanukkah.

Blessed are You, Lord our God, king of the universe, who has performed miracles for our ancestors in olden times and in our times.

And the Sheheheyanu recited only on the first night:

Blessed are You, Lord our God, king of the universe, who has given us life and sustained us and brought us to this happy season.

After the first candle of the day is lit, it is the custom to recite the prayer Hanerot halalu, "These lights that we kindle for the miracles, for the wonder, for the salvations, and for the battles You performed...," and sing the hymn Maoz tzur yeshuati, "O stronghold, rock of my salvation".

Posted by Mountjoy at 3:10 PM 0 comments