12 Reasons why I believe Jesus was crucified on the Mount of Olives. 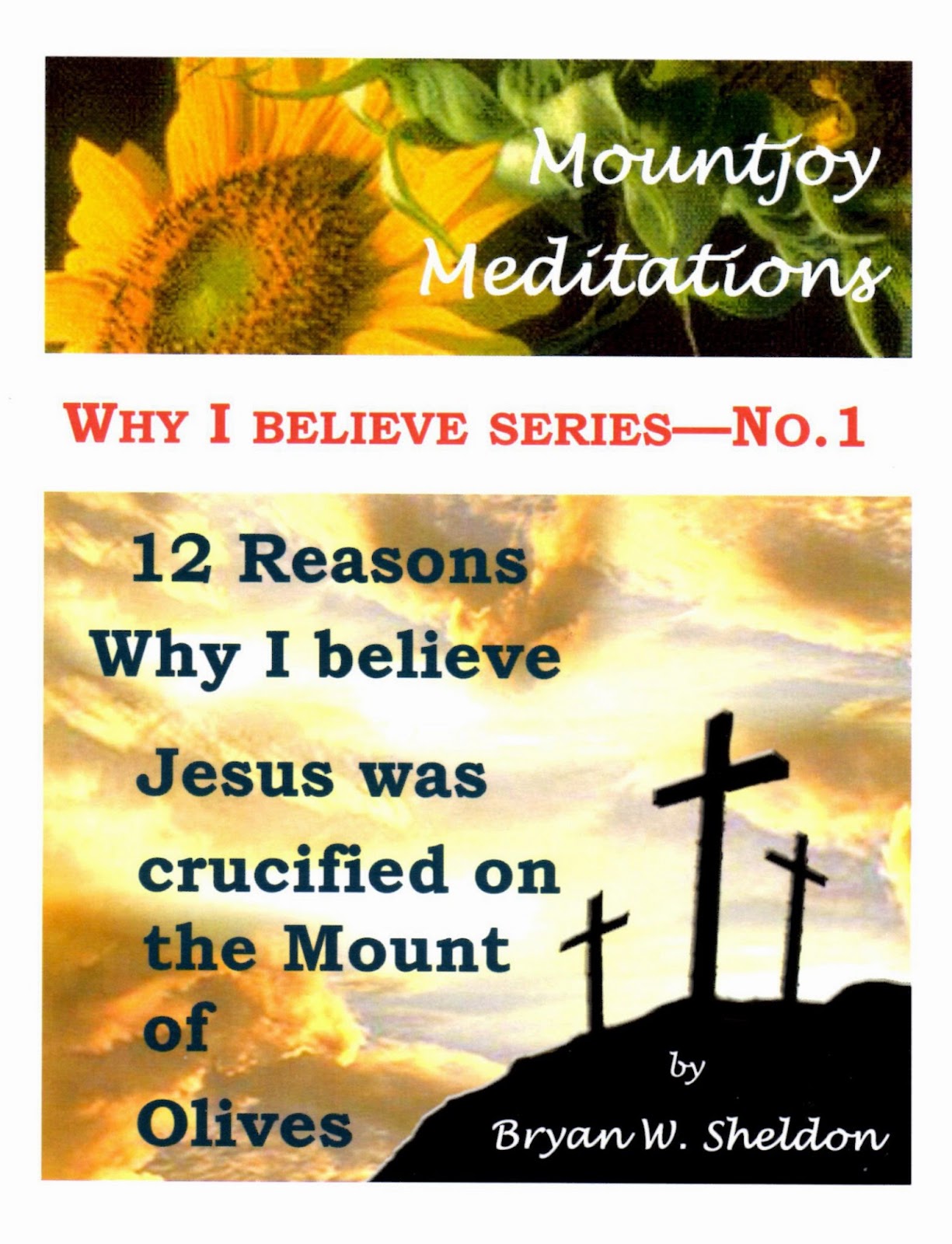 The site of the crucifixion of the Saviour of the World has been considered and debated for centuries. There have been those who have taken clues from the Gospel writers, added such information that has been provided by archaeology, and pointed to some spot either in or near the city of Jerusalem. But for those who are Bible students the results do not seem to echo that which they feel the Scriptures depict.


There are two sites that have obtained favour, one is now the site of the Church of the Holy Sepulchre, and the other is known as Gordon’s Calvary. Most visitors to Jerusalem are taken to these locations where they may contemplate the mighty act of redemption that is said to have taken place there. But the Bible tells us that the death of Jesus of Nazareth, Messiah of Israel and Son of God, was as a sacrifice for sin, and if so, had to meet the very particular and detailed requirements laid down in the T’nach for an acceptable sacrifice. If His crucifixion took place at either of the traditional locations it would not have been admissible and we would still be without hope. Moreover, the whole purpose of the incarnation would have been overthrown and Satan would have accomplished His purpose of ensuring that the death of the Messiah was invalidated because it did not meet the strict demands laid down in the Torah.


However, this writer suggests that the death Jesus accomplished met all constraints. It was in the right way, at the right time and also in the right place. I believe that the Bible gives us enough detail to be confident that all the types and prophecies were fulfilled and every constraint satisfied. Accordingly we can be confident that future events will also be fulfilled exactly as prophesied in the Scriptures.


So this booklet is offered to provide some Scriptural pointers to the place where the greatest single act for the salvation of humankind was accomplished. I believe that the death of Jesus was prophesied in the T’nach (Old Testament) and accomplished in accordance with prophecy and type. Therefore it had to be on the day specified, at the time designated, fulfilling prophecy and specifically in the place chosen by God. 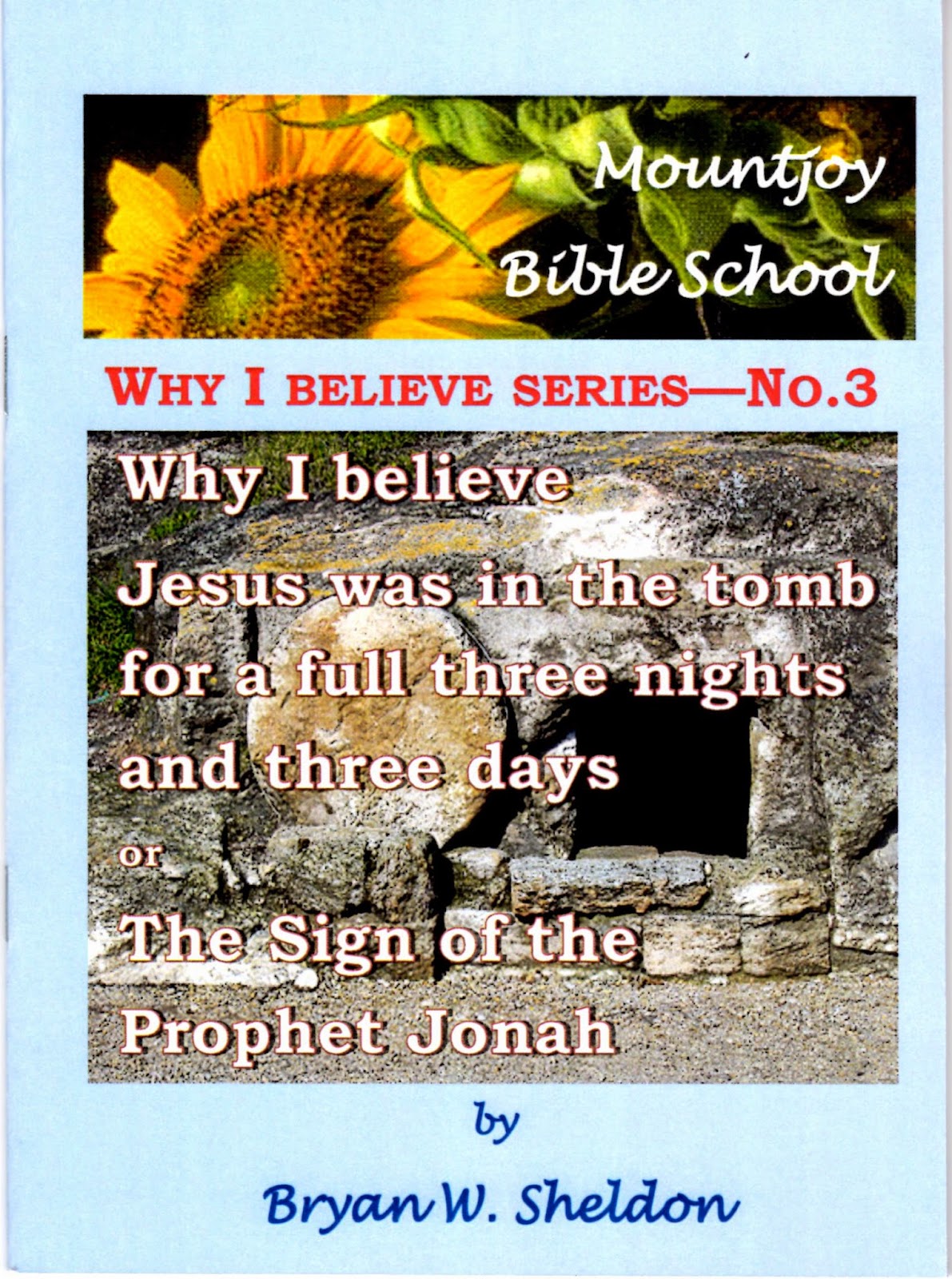 One of the most frequently raised questions at our Bible Schools is ‘how do we square the sign of the prophet Jonah (that Jesus was to be in ‘the heart of the earth’ for three days and three nights), with the traditional view that Jesus died on a Friday and rose on the following Sunday, a period of less than two days?’


While the question does not impact on our salvation (that is secure if we believe that Jesus died for our sins and rose again), nevertheless a lack of clarity on the subject is enough to be an irritation and possibly, for those of a certain temperament, a pinprick in their confidence in the total reliability of the Bible.


The usual method of squaring the circle is stated thus: “‘Three days and three nights’ represents a Semitic idiom for any portion of three calendar days. So there is no need to see a contradiction with the usual Holy Week chronology, including a Friday crucifixion and a Sunday resurrection, or to propose an alternative chronology” (Craig L. Blomberg). This does not sit well with some of those that study the Scriptures.


In our teaching sessions I have offered an alternative which appears to have been well received, as a result of which I have been asked to publish.


I recognise that what I offer will not satisfy all—it does not dot all the i‘s and cross all the t‘s, but it is submitted with a humble desire to contribute to the discussion.

The Messiah and the Priesthood of Israel

The education of the nation of Israel was extensive, detailed and 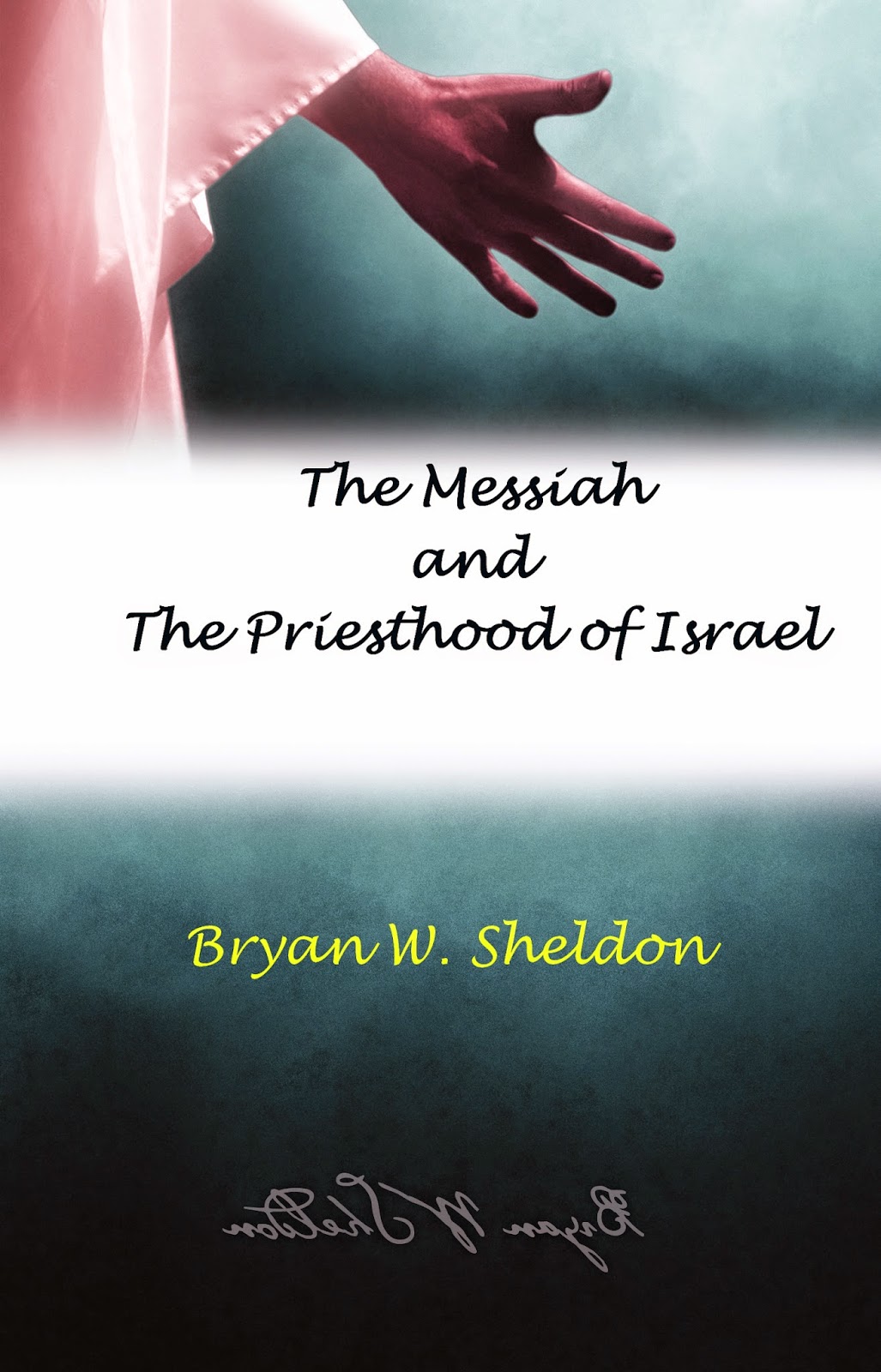 comprehensive. It was founded by covenant which established a priestly system that was meticulously organized and designed to function continuously. At its heart was a purpose-built Sanctuary where the priesthood could operate as mediators between the nation and the Lord. In addition to daily offerings, the divinely inspired Law provided for a calendar of pre-ordained festivals where Israel could articulate their appreciation for the bounty and mercy of their God.


All of these, the Priesthood, the Sanctuary, the Sacrifices and the Festivals, were needed to prepare Israel for the coming of their Messiah, the One whose multi-faceted ministry would require Him:


to be a High Priest of the order of Melchizedek,


operate in the heavenly Sanctuary


where He would offer a superior sacrifice


in accordance with the pre-ordained timetable


to inaugurate a superior covenant.


This book seeks to acknowledge the greatness and glory of the Lord Jesus as He fulfilled in every detail that which was prefigured by the priestly culture of Israel.


His was no ordinary death: the biographical part of the New Testament speaks of His dying as being different to the death of any other individual, even different to those who were executed at the same time and in the same location as Him. What was the difference? His decease is put forward as a death that He accomplished. Not in the terms of a suicide but rather the ordering of events to fulfill those necessary pre-conditions published by the Creator God for a substitutionary sacrifice that would provide the grounds for the reconciliation of sinful humanity. Others might suffer death but He accomplished His (Luke 9:31). His decease had to be at a very specific time, on a very specific date, in a very specific place, in a very specific way. Although it seemed He was always in imminent danger of losing His life, He declared that none of the attempts on His life would succeed until He presented Himself to die in Jerusalem, on a day that He chose, at a time that He selected, in a pre-ordained location as a ransom for humanity. In other words His death was the sacrificial offering that in itself satisfied every demand of a holy God and needed nothing further to perfect it, while at the same time it ministered meaning to all of Israel’s previous sacrifices.


Moreover, a sacrifice needs a priest to offer it. Instructions contained in the Bible declare that a qualified, gifted and called intermediary was necessary for the offering to be acceptable to God. The wonder of the cross is, that in the purposes of God, the office of priest is occupied by the same One who was the sacrifice. If we may give a particular emphasis to the words of Abraham when he was on a similar quest; he said, “My son, God will provide himself a lamb for a burnt offering” (Gen. 22:8, KJV) (all references will be from the NKJV unless otherwise stated). Jesus, Israel’s Messiah, as High Priest brought the perfect sacrifice (Himself) and lay down His life for the sins of the world; then continuing in His office as High Priest entered the presence of God with the blood of the sacrifice, that is, His own precious blood. The objection that He was not of the tribe of Levi and the family of Aaron, as required by the Law of Moses, is overcome by the knowledge that there was another order of High Priest in the Bible; an order that is identified as being superior to the Aaronic order; an order that allows for a King/Priest. It is the order of Melchizedek (Ps. 110:4 based on Gen: 14:18-20 (see chapter 14)). The Scriptures put forward the case that Jesus of Nazareth was called to be High Priest of that order.


This book is therefore a study based on the premise that the Priesthood and Monarchy of Israel were offices authorized by God to prepare Israel for the coming of their Messiah, although for our current enquiry it will be the Priesthood that will receive our attention. To be able to extract spiritual benefit from this subject we will need to examine the history and training of Israel. There we will find finger-posts and pointers to the coming of the One who would be Sovereign and Saviour, Priest and Offering.
Posted by Mountjoy at 8:01 PM 0 comments