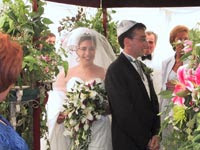 The Wedding at Cana in Galilee (Continued)

Nowadays, the sevenfold marriage blessing is:
1. You abound in blessings, Adonai our God, who created the fruit of the vine.


2. You abound in blessings, Adonai our God, You created all things for Your glory.


3. You abound in blessings, Adonai our God, You created humanity.


For blessings very similar to these, Jesus provided the wine. The One who was present in Cana was the Creator of the fruit of the vine (blessing No.1), and created all things for His glory (blessing No.2). He created man (blessing No.3) in His likeness, and for a relationship (blessing No.4). He had rejoiced with Adam and Eve in Eden (blessing No.6), and wished to bless Zion (blessing Nos.5&7). If they would receive Him they would have joy “up to the brim” – new wine!
Those attending the wedding were aware of the significance given to marriage in the T’nach. It was customary, then as now, to reflect on the union that took place in the Garden of Eden, which God blessed by His presence. Jesus used this occasion to reveal Himself to His disciples as the creator God, or as John puts it, “manifested (revealed) His glory” (John 2:11), that is made visible and known, the glory of God incarnate. ‘Manifested’ or ‘revealed’ is a word to indicate a revelation - something hid, now visible. It is the word that Jesus used in His high priestly prayer, when He asserted that He had disclosed to them the divine reality, the Name of God, “I have manifested Your name to the men whom You have given Me out of the world.” (John 17:6) No wonder John declared, “… the Word became flesh and dwelt among us, and we beheld His glory.” (John 1:14)

Incidents in the LIfe of the Messiah


John identifies the miracle at the wedding in Cana of Galilee as being the first.  Nevertheless, it appears from the words of the Messiah that it would have been a more appropriate sign at the end of His public ministry. This is why He said to His mother, “my hour has not yet come” (John 2:4). But the grace of God permits it at the beginning.
The main facts are these. Jesus and His disciples attended a wedding where they ran out of wine. When His mother brought this information to His attention, she expected Him to do something about it.  He commandeered the six giant water pots that held water for the ritual cleansing of the family and guests.  Each of the water pots held between twenty and thirty gallons.  The Messiah ordered the servants to fill them with water.  The servants filled them to the brim. He changed this  water into wine – the best wine, according to the governor of the celebrations. John adds, “This beginning of signs Jesus did in Cana of Galilee, and manifested His glory; and His disciples believed in Him.”  (John 2:11)
This first miracle demonstrates the seeds of the move from law to grace.  John had previously stated, “the law was given through Moses, but grace and truth came through Jesus Christ.” (John 1:17) The water, which had been set aside for the rituals of purification, is a reminder of the legal requirements being imposed on the population at that time.  The Pharisees wanted the general public to observe the rules of ablution that the priests in the Temple obeyed. They were aiming to establish a kingdom of priests! These champions of legalism were legislating joy out of the nation. Jesus turned the water, symbolic of the ritual cleansing under the Mosaic covenant, into wine, the symbol both of the New Covenant, where it represents the blood of the Messiah shed for sin, and the blessing under the Melchizedekian priesthood. In providing between 120 and 180 gallons of best wine it is also a physical illustration of the text, “I am come that you might have life and that more    abundantly” (John 10:10).
At a wedding feast, they formally drank several cups of wine.  The first was the cup of Terumah, which denoted that the virgin bride might have had a priest as a bridegroom.  (The Church’s bridegroom will be the High Priest of the order of Melchizedek) (Heb.6:20).
The second cup was the cup of good news when they proclaimed and certified the virginity of the bride. (The Church is espoused to Christ as a chaste virgin) (2 Cor.11:2).
They pronounced the bridegroom’s blessing over the third cup, a blessing that was repeated every day of the feast. At this wedding, attended by Jesus and His disciples, the supply of wine ran dry. Mary asked her son to address the   problem. Jesus, as Messiah of Israel,  rather than Mary’s son, responded to the challenge.
It is unlikely the wine ran out before they drank the cup of Terumah, because that took place at the beginning of the celebrations.  For the same reason, it is unlikely, that it was before the cup of good news.  It could  be  that  the  problem  surfaced  when the governor of the feast was preparing to pronounce another of the bridegroom’s blessings, or  perhaps a blessing after the order of the customary sevenfold marriage blessing.
Next Time: The Marriage Blessing

The Life of the Messiah 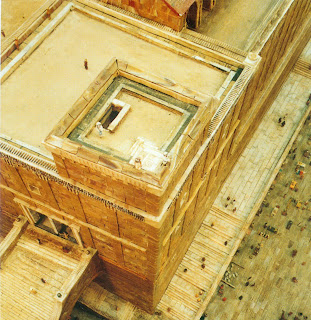 In Luke’s account the third temptation (in Matthew it is the second) brought another change of scenery. Satan took Jesus to the top of the tower on the south-western corner of the Temple Mount, where he challenged Him, “If You are the Son of God, throw (cast) Yourself down. For it is written: He shall give His angels charge over you, and, In their hands they shall bear you up, Lest you dash your foot against      a stone” (Matt.4:6; Luke 4:9-11). This less than subtle effort was another attempt to get Jesus, Son of God, to occupy the position of the one ‘cast down’.  Israel’s Messiah, who must have been meditating on the trials and difficulties of Moses, His Messianic predecessor, responded to the Devil with another quote from Deuteronomy: “You shall not tempt the Lord your God” (Matt.4:7; Luke 4:12; Deut.6:16). The full quote is, “You shall not tempt the Lord your God as you tempted Him in Massah.” Massah is the Hebrew word for ‘tempted’, as recorded in Exodus: “so he called the name of the place Massah … because of the contention of the children of Israel, and because they tempted the Lord, saying, Is the Lord among us or not?” (Exod.17:7) Jesus, recalling this episode from the history of the wandering nation, used the quote from the speech of Moses to repulse the temptation, and affirm that God was with Him - a   powerful  riposte  to  the  conditional challenge,  “if You are the Son God”. James encapsulates not only the thrust and parry of the     conflict but also the outcome when he wrote, “… submit to God. Resist the devil and he will flee from you” (James 4:7).


After Satan had left Him, and angels had ministered to Him, He “returned in the power of the Spirit to Galilee, and news of Him went out through all the surrounding region”. (Luke 4:14)


Although Jesus had successfully repulsed the Devil in the Judean wilderness it did not end Satan’s attacks. When He presented Himself to His home congregation in Nazareth as Messiah,  they questioned His authority to make such a claim. Jesus sensed their unbelief and responded, “no prophet is accepted in his own country” (Luke 4:24). He followed this statement with two examples of prophets ministering to Gentiles while Israel was in unbelief. Those people who had been fellow citizens of His were filled with a demonic fury and “rose up and thrust Him out of the city; and … led Him to the brow of the hill on which their city was built, that they might throw Him down over the cliff” (Luke 4:29). Having failed to manipulate the Messiah into being the ‘cast down’ one, here Satan inspired those that had been His neighbours, His customers, His friends, to enact it. It was another attempt to kill Him before His time and by a method that would     reverse the prophecy of God. To bruise Satan’s head, Jesus would have to be the ‘lifted up’ One. The people of Nazareth tried to make Him the ‘cast down’ One.  Jesus “passing through the midst of them … went His way” (Luke 4:30) A similar incident took place later in His ministry where He coined the more famous phrase that has now become a proverb: “A prophet is not without honour except in his own country” (Mark 6:4; Matt.13:57). Of those in Nazareth the biographer stated: “He did not do many mighty works there because of their unbelief” (Matt.13:58).

More Next Time
Posted by Mountjoy at 10:56 AM 0 comments