Hanukkah in History and Prophecy


After the reigns of David and Solomon the fortunes of the Jews were always intimately connected with Jerusalem and the Temple. If they habitually broke the Law of God they lost the city and the Temple, as when the Babylonians came. But when they returned to God, they were restored to the city, as at the time of  Nehemiah and Ezra. And when they returned to the city the whole community worked together to rebuild the Temple. On its completion they celebrated with a Hanukkah service, for in Ezra 6:16,17 the term  translated “dedication” is again ‘hanukkah’. The festivities and service were nothing to be compared to that of Solomon, nevertheless it was a joyful time - they had seen God’s hand of protection and provision, so now they celebrated. Celebrations have always been vital for the people of God. They are occasions of fellowship, of worship, of glorifying God. The sin offerings comprised of “twelve male goats, according to the number of the tribes of Israel” while the fellowship offerings were “one hundred bulls, two hundred rams, four hundred lambs” (Ezra 6:17). It was permitted, nay required, that the meat of the fellowship offerings should be shared with priests, offerers and their     families, so it can be assumed that the service of    dedication ended with a great feast in which everyone participated and which was used to bind the community together. And, as was customary at such festivals, the purpose and history of the nation was explained.


Because of the loss of sovereignty when they returned to Israel after the seventy year period of exile, they could not return to the political structure that operated at the time of David and Solomon. And since the main impulse for the return to the land and the reconstruction was religious then that became the dominant force in Israel. The High Priest became the supreme head of state as well as the supreme director of worship. The authority of the king was replaced by the authority of the High Priest and since his seat of jurisdiction was the Temple then that became the   centre of the nation’s government as well as its centre of worship.


Ezra was the one who contributed most to the authority of the priesthood and the religious development of the nation after their return from Babylon. He had reasoned that the Babylonian captivity was a judgment of God, the cause of which was broken law.  Moses had warned:


“So watch yourselves, that you do not forget the covenant of the Lord your God which He made with you, and make for yourselves a graven  image in the form of anything against which the Lord your God has commanded you. For the Lord your God is a consuming fire, a jealous God. When you become the father of children and children’s children and have remained long in the land, and act corruptly, and make an idol in the form of anything, and do that which is evil in the sight of the Lord your God so as to provoke Him to anger, I call heaven and earth to witness against you today, that you will surely perish quickly from the land where you are going over the Jordan to possess it. You shall not live long on it, but will be utterly destroyed. The Lord will scatter you among the peoples, and you will be left few in number among the nations where the Lord drives you”  (Deut. 4:23-27).

To avert any future judgments and deportations it would be 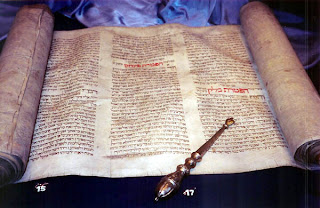 necessary for Israel to be a ‘Law-abiding’ nation. They must obey the Law of God. But this would be impossible if they neither knew nor understood the Law, so he founded the school of Scribes called the Sopherim. They were to examine and teach the Law of Moses to overcome any lack of knowledge.

However, to the foregoing laudable aim they added the seed of something that was to undermine the written Hebrew Scriptures themselves, for to Ezra and the men of the Great Synagogue was ascribed the ancient saying, "Make a hedge for the Torah" (Abot 1.1.I.C(3) (Mishnah)). There are 613 explicit laws in the five books of Moses. These were to be examined and re-enforced. The purpose was to set the bar higher, to make the law stricter, thus offering some protection from even breaking the Mosaic Law inadvertently. It was the second generation Sopherim who sought to fulfil that ambition. The principle on which they worked was, a Sopher (Scribe) could disagree with a Sopher but not with the Torah. When they reached a majority agreement these additional laws became binding on all Jews.
The work of the Sopherim was continued and supplemented by the work of the Tanaim (Repeaters). These extra regulations are referred to in the gospel records under the term "tradition", that is, "the tradition of the elders" (Matt. 15:2; Mark 7:3,5) or the "tradition of men" (Mark 7:8). Thos that supported and sought to enforce these supplementary regulations played a big part in the events at the time of the Maccabees and the time of Christ. However, Jesus never accepted that these extrapolated rules had divine approval and rejected them. Nevertheless, they exerted substantial influence on sections of the Jewish population, particularly the 'pious'.

The Dedication of the Temple at the time of Solomon 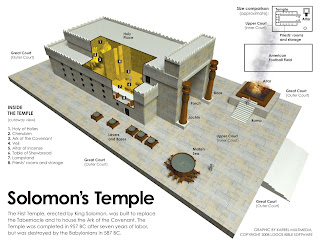 A great change in the worship of YHWH had taken place after David had conquered the Jebusite town of Jerusalem on the southern slope of Mount Zion. He understood that sacrificial offerings could only be made in the place that the Lord selected, as revealed in the Torah:
“Take heed to yourself that you do not offer your burnt offerings in every place that you see; but in the place which the Lord chooses, in one of your tribes, there you shall offer your burnt offerings, and there you shall do all that I command you” (Deut. 12:13–14).


He subsequently understood that Mount Moriah was to be that place (1 Chron. 21:28-22:1). “Then David said, ‘This is the house of the Lord God, and this is the altar of burnt offering for Israel’” (1 Chron. 22:1: See also 2 Chron.6:20; Ps.132:13). So he expressed the view that the tent-shrine should be replaced with something more permanent; a Temple where Israel could gather to fulfil their obligations at festival times. David voiced his thoughts to the prophet Nathan. “See now, I dwell in a house of cedar, but the ark of God dwells inside tent curtains” (2 Sam. 7:2). Initially, Nathan supported David’s idea, but a message from the Lord, revised the program. Intelligence from heaven directed that the son of David, Solomon, should build the Temple: “He shall build a house for My name” (2 Sam. 7:13). The desire of God to “dwell among them” (Exod.25.8) was still in place.


When the building was completed, Solomon sent particular invitations to the elders and dignitaries of Israel to join him in a service of dedication. The strength of Israel, its manpower, was already required to come, for the dedication service was diarised to coincide with the pilgrim feast, the Feast of Tabernacles, in the seventh month.


But first, the ark (the golden chest also known as the ‘throne of God’) had to be brought to its new home.  David had embarked on such a project when he first brought the ark to Jerusalem but found it was fraught with danger (see 2 Samuel 6.1-10). Solomon, no doubt with an acute knowledge of the problems that David had encountered, made sure that those who had been commissioned for the care of the ark and were properly authorised to carry it, were the only ones to bear it.


When David brought the ark to his capital city he had an honour guard of thousands of soldiers lining the route, while Levitical musicians and singers performed the Psalms, especially Psalm 24. At the gate of the city of David they called for the entry of the ark, the symbol of the localised presence of God:


“Lift up your heads, O you gates!
And be lifted up, you everlasting doors!
And the King of glory shall come in.

Who is this King of glory?


The Lord strong and mighty,
The Lord mighty in battle.


Lift up your heads, O you gates!
Lift up, you everlasting doors!
And the King of glory shall come in.


Who is this King of glory?


The Lord of hosts,
He is the King of glory”.


Solomon took care not only to equal the dignity accorded the ark by David, but to exceed it. So it was with great ceremony that he brought the ark to the Temple. Before the ark was placed in the Inner Sanctum, Solomon and Israel’s leaders offered many sacrifices in honour of its arrival, at the same time dedicating the new brazen altar. It is recorded that the ark still housed the two tablets on which was written the Decalogue, confirming that the Mosaic Covenant with its priestly culture was still in place. It was only after Solomon felt that proper honour had been shown to the sacred chest, was it taken into the Holy of Holies to be lost from sight to all except the High Priest.


Solomon had built a high dais from which he could be seen to offer obeisance to the Lord. It also allowed  him to turn to face Israel and bless the assembled company. From his high platform he offered a prayer of dedication connecting the building of the Temple with the inspired wishes of his father David and the Davidic Covenant.


The prayer of dedication acknowledged that the Temple was only a shadow of reality, since God dwelt in    heaven, and not behind the veil. Nevertheless, he was confident that he had the listening ear of YHWH and so petitioned God that since this house, this Temple, was to be known as the place where God had placed His Name (in accordance with the revelation made to David), that those that offered penitential prayers towards it should receive forgiveness.


Included in Solomon’s prayer was a petition for the restoration of Israel in their land if ever they suffered at the hands of a foreign invader:


“O Lord my God … if Your people Israel are defeated before an enemy because they have sinned against You, and return and confess Your name, and pray and make supplication before You in this temple, then hear from heaven and forgive the sin of Your people Israel, and bring them back to the land which You gave to them and their fathers” (2 Chron. 6:24–25).


“Now, my God, I pray, let Your eyes be open and let Your ears be attentive to the prayer made in this place.
Now therefore, Arise, O Lord God, to Your resting place, You and the ark of Your strength.

Let Your priests, O Lord God, be clothed with salvation,


And let Your saints rejoice in goodness.


O Lord God, do not turn away the face of Your Anointed;


Remember the mercies of Your servant David”