The Messiah & HIs Miracles 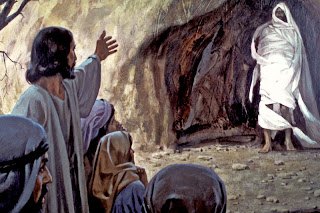 The Raising of Lazarus


The narrative of the rich man and Lazarus was the first stage of the sign of the prophet Jonah – the stage of education.  The second stage would be demonstration through the miracle of raising a man from Hades.   The third stage would be participation, when the Messiah himself would return from Hades.  Jesus, at this time, was not reactive but proactive.  He was following a planned timetable. A message came from to the Messiah that Lazarus, His good friend, was ill.[1]  Jesus said, “This sickness is not unto death, but for the glory of God, that the Son of God might be glorified through it”.  Nevertheless, He not only waited until Lazarus had died, but planned His journey so that when He arrived Lazarus had been dead three days and three nights. When He arrived at the graveside, He indicated that the miracle He was about to perform was the sign for the nation, “Father, I thank You that You have heard Me. I knew that You always hear Me; but because of the people standing around I said it, so that they may believe that You sent Me.”[2] He also identified it as a sign of deity, “Did I not say to you that if you believe, you will see the glory of God?”[3]  So Jesus commanded, “Lazarus come forth!”[4]  And he that had been dead four days rose from the grave.  It was commonly believed by the Jews of Jesus’ day that the spirit of the individual did not descend into Hades until after 3 days.  Therefore, the raising of Lazarus on the fourth day was a suitable sign for the wicked generation who had asked for a sign from heaven but given a sign from Hades. It was also the pre-curser for the true sign of the prophet Jonah, in which the Messiah would rise from Hades after three days and three nights.


Because of this final attesting sign, many believed. But the nation’s leaders, being fearful that their wealthy, privileged, lifestyle could be lost, still plotted to kill Him and destroy the evidence of the sign: “The chief priests consulted that they might put Lazarus also to death; because that by reason of him many of the Jews went away, and believed on Jesus”. Soon after this sign, and immediately after Caiaphas had led the Sanhedrin to agree to the execution of Jesus, the Messiah sent them ten healed lepers, to leave them without excuse! The Messiah had indicated in the relating of the experiences of the rich man and Lazarus, that if they did not believe Moses and the prophets, they would not believe though one was brought back from Hades.  By implication, He again says that they did not believe the Scriptures, repeating the essence of an earlier condemnation, “Do not think that I will accuse you before the Father; the one who accuses you is Moses, in whom you have set your hope. For if you believed Moses, you would believe Me, for he wrote about Me.”[5]


The condemnation of the nation and its leaders was complete.  They did not base their lives on the T’nach, they did not live by faith, and against a wealth of evidence the record of which, if written down, would exhaust all available space on earth, (evidence that included having the serpent in subjection, mastery over leprosy, and raising the dead), they rejected God’s Son their Messiah. Jesus believed them culpable: “If I had not done among them the works which no one else did, they would have no sin; but now they have seen and also hated both Me and My Father. But this happened that the word might be fulfilled which is written in their law, They hated Me without a cause.”[6]  He described them as a wicked, evil, adulterous generation, who worshipped Mammon.  This generation of vipers, rejecting the Word of God, and accepting the word of Satan, spoke with a forked tongue.  They followed their father, the Serpent, who is the father of lies. Their web of deceit was never more evident than when events came to their inevitable conclusion; and wicked hands took the holy and innocent Son of God and tried Him for blasphemy and treason.
More Next Time

The Messiah and His Miracles

The Rich Man and Lazarus


To prepare the Sanhedrists, those “servants of Mammon (wealth)”, and “lovers of money”[1] who had rejected Him,[2] He described a certain rich man who had both wealth and position, a condition that the Sanhedrists would have attributed to the blessing of God.  The Rabbis taught that wealth was a sign of the favour of God (‘whoever the Lord loves He makes rich’).  In contrast with the ease and comfort of the rich man, Jesus described the desperate position and condition of a beggar named Lazarus, who must have been daily visible to the wealthy Jew. Lazarus’ hopes were not great, just that he might have some crumbs that fell from the rich man’s table.  In course of time, both men died and went to Hades/Sheol.


This place of the dead had two main compartments, the first part, sometimes called ‘Abraham’s bosom’, was reserved for those that died with a true faith in God. This part, in many ways, mirrored heaven. Since animal sacrifice only covered sin, but did not remove it, those that died in faith before the death of the Messiah on the cross, would not go to hell but could not get into heaven, hence the place called Abraham’s bosom.  The second part of Hades/Sheol was a place for those who had either rebelled against God or failed to respond to the light He offered.


(1) The abyss or bottomless pit is a temporary place of confinement for fallen angels (God will imprison Satan there for a thousand years).[3]  The demons in the Gadarene Legion “begged Him that He would not command them to go out into the abyss”. [4]


(2) Tartarus is a more permanent place of confinement for fallen angels.  “God did not spare angels when they sinned, but cast them into hell (Tartarus) and committed them to pits of darkness, reserved for judgment”. [5] (From here, they go directly to the lake of fire).


(3) Gehenna is the place of torment for the wicked. Jesus speaks of it as the destiny of those who rejected Him as Messiah. “Serpents, brood of vipers! How can you escape the condemnation of hell (Gehenna)?" [6]


Since they are three subdivisions of Hell, they obviously have many things in common.


Lazarus, whose name means ‘God helps’, went to Abraham’s bosom, whereas, contrary to all the teaching of the Pharisees, the rich man went to Hell.  The Pharisees taught that all Jews would go to Abraham’s bosom, (“all Israelites have a share in the world to come”)[7] but the Messiah related to them the experience of a Jew (he addresses Abraham as ‘Father’, and Abraham responds with ‘Son’), who is in Hell.


The narrative clearly implied deity because Jesus had knowledge of a conversation between two actual Jews in Hades, after death.  He described the torment of the Jewish rich man and the comfort of the beggar named Lazarus.  As with Jonah they can speak, remember and pray.  The rich man asked Abraham to send Lazarus to him with some water to relieve his torment, but Abraham tells him of the gulf between them that is impassable.  Unable to obtain any measure of respite, he asked that Lazarus might be despatched from Hades on a mission to his brothers, to persuade them to repent.  The wealthy Jew was asking that his family might be given the sign of the prophet Jonah!  “I beg you, father, that you send him to my father’s house— for I have five brothers—in order that he may warn them, so that they will not also come to this place of torment”.[8]  The tormented Jew was unwittingly asking for a Jonah to go to his brothers as Jonah had been sent from Sheol to . But his brothers had already had that opportunity because a greater than Jonah had preached, “Repent, for the kingdom of heaven is at hand.” [9]  Abraham replied, “They have Moses and the prophets; let them hear them”.   Whereupon the rich man said, “No, father Abraham: but if one goes to them from the dead, they will repent”.[10] He asserted the Bible was not enough – they needed signs and wonders.  Abraham responded, “If they do not listen to Moses and the Prophets, they will not be persuaded even if someone rises from the dead.” [11] If they will not believe and obey the Scriptures, then signs and wonders will make no difference!  This was another public warning to the Pharisees.