The Feast of Dedication in History and Prophecy


But to return to the conduct of Antiochus. Daniel described it fully: “At the appointed time he (Antiochus) shall return and go toward the south (Egypt); but it shall not be like the former or the latter. For ships from Cyprus (carrying the Romans) shall come against him; therefore he (Antiochus) shall be grieved, and return in rage against the holy covenant (the Jewish people), and do damage” (Dan.11:29–30). This happened exactly as Daniel had predicted. No longer able to proceed against Egypt, Antiochus was compelled to turn back, ready to vent his fury on Israel. He sent Apollonius, the head of his mercenaries and the chief collector of tribute, to Jerusalem. Antiochus ordered him to ‘thoroughly Hellenise the Jews’. Apollonius pretended to come in peace but on the Sabbath day he suddenly attacked, killing many and plundering the city. The walls of Jerusalem were thrown down and the old city, the city of David, was fortified. A garrison of Syrian soldiers was billeted there. It was decreed that Jerusalem was henceforth to be known as a Greek city.


Further measures were introduced to accelerate the programme of Hellenisation. Jewish worship was suspended and Jewish ceremonies strictly forbidden. Once a month a rigorous search took place. If any man was found with a copy of the Torah, or if any had his child circumcised, he was put to death. Throughout Israel the Jewish religion was rooted out and the worship of the Greek gods introduced. But Antiochus was impatient and heavy handed. He tried to force the issue. Resistance among the population grew and support for the Chasidim increased. Events came to a head when he commandeered the Jerusalem Temple for his own purposes. On the 15th Chisleu 168 BC, that is, in December of that year, he initiated an incident that outraged the nation. A pagan altar was built at the great altar in the court of priests. Then ten days later on the 25th Chisleu, a  sacrifice to the Greek god Zeus was offered on it. In this way the Sanctuary was defiled.


These high-handed actions of Antiochus Epiphanes are considered by many as the fulfilment of prophecies from the book of Daniel. In conjunction with the prophecy of the division of Alexander’s empire into four after his death, there is added another prediction. From one of the four parts of the empire, that of Syria, will arise another ruler, a “little horn” that will speak great things (see Daniel 7:8 and 8:9 ff). Many scholars suggest that this little horn represents the eighth ruler of the Seleucid Greek Empire, the afore-mentioned Antiochus Epiphanes. Daniel, who lived and wrote long before Alexander was born, or ever the events of the Maccabean uprising took place, foretells with supreme accuracy the pivotal event which will break the oppression of the Syrians. He wrote;


“they shall defile the sanctuary fortress; then they shall take away the daily sacrifices, and place there the abomination of desolation” (Dan. 11:31).


This verse points directly to the defiling of the Temple by Antiochus in 168 BC. Initially, the Hebrew people only reacted with passive resistance but this was soon replaced by open revolt. It broke out in the town of Modein at the call of a priest of the order of Joarib, named Mattathias. When the king’s officer came to  Modein with orders that the inhabitants offer a heathen sacrifice, Mattathias refused to obey and stepping forward said:


“Though all the nations that are under the king’s dominion obey him, and fall away every one from the religion of their fathers and give consent to his commandments, yet will I and my sons and my brothers walk in the covenant of our fathers. God forbid that we should forsake the law and the ordinances”.


When Mattathias saw another from the town approaching the altar to offer the sacrifice and appease the king’s officer he rushed forward and slew him there. He and his sons also killed the king’s commissioner and levelled the altar to the ground. Mattathias and his five sons, John, Simon, Judas, Eleasar and Jonathan, fled to the mountains and were joined by others of the Chasidim. In this fashion a campaign of guerrilla warfare was born. The son of Mattathias, Judas was appointed military leader of the movement and he and the force under him felt that they had the God of Abraham, Isaac and Jacob on their side. They marched against the Syrians and won a brilliant victory. They began to restore the worship   of YHWH in Zion. This gave further impetus to the   rebellion. Judas became known as ‘the hammer’, that is, ‘Maccabeus’.


Antiochus was engaged elsewhere, but he gave orders that a large army should be commissioned to put down the rebellion. By now Judas’ army was battle-hardened but not wishing to take anything for granted they prepared for the encounter with prayer and fasting. Again they were victorious. After another victory Judas took possession of Jerusalem. Although he could not dislodge the Syrian forces from the walled and fortified ‘city of David’, he was still able to keep them in check while cleansing the Temple ready for a resumption of divine worship. Everything impure was carried out of the Temple and the great altar which had been polluted was dismantled and wholly replaced. New sacred garments and furniture were provided, and when everything was in order the Temple was re-consecrated. A joyous occasion it was celebrated with a great feast. This was on the 25th Chisleu, that is, in December 165 BC on exactly the same day as the altar had been desecrated three years earlier.


When the Temple was first dedicated during the reign of Solomon it was at the feast of Tabernacles in the month of Tishri in the autumn. That celebration lasted eight days. So, although the Maccabean Hanukkah was in winter it was decided that it should also last for eight days. The recovery of the Temple for the worship of YHWH was so momentous that it was resolved to celebrate it annually. It was added to the festival calendar and called ‘the Feast of Dedication’.


Alas, the time of independence under the Maccabees was not long-lasting. While the leaders kept their early confidence and followed the example of Jonathan (son of Saul) who said, “… nothing restrains the Lord from saving by many or by few.” (1 Sam. 14:6) they were invincible. But to maintain the peace they began to make political alliances with others in the region. Their total dependence on God was compromised and the freedom which they bought with great cost was lost. Nevertheless, the Israelite nation always looked back to the time of the Maccabees with pride, especially the Pharisees who considered themselves the inheritors of their cause. The words of Mattathias could well describe their motivation: “Though all the nations that are under the king’s dominion obey him, and fall away every one from the religion of their fathers and give consent to his commandments, yet will I and my sons and my brothers walk in the covenant of our fathers. God forbid that we should forsake the law and the ordinances”.


The Pharisees considered themselves the defenders of the law and the ordinances. 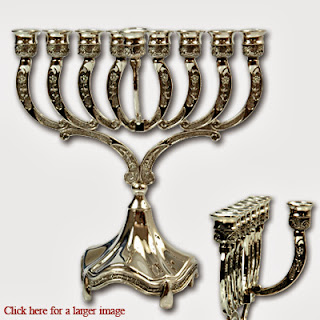 Post Script: This festival is also called the Festival of Lights, for in the Talmud the story was further   elaborated to tell of a miracle that took place. They could only find one jar of sacred oil bearing the seal of the High Priest. Only this pure oil could be used to light the Temple Menorah and it was just enough for one day and one night, no more. Miraculously, the one day’s supply kept the Menorah alight for eight days, that is, until more pure oil was available. It was     seen as a sign of God’s acceptance of the Temple’s rededication. Today in Jewish circles this is reflected in the lighting of the hanukiyah, the eight light lamp, or eight branched menorah. In the Feast of Tabernacles (the festival during which the first dedication took place) the lamps were lit while mainly looking back – to the journey of Israel in the wilderness. At the Feast of Dedication the lights were lit while mainly looking   forward, pointing to a hoped-for time when the Messiah would come to the Temple and establish, as Judas Maccabeus had, a time of independence.
Next Time: Hanukkah at the time of Jesus