The Life of the Messiah (Continued) 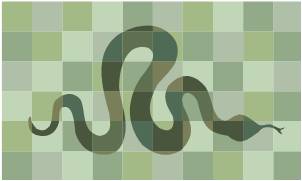 In respect of the next two temptations, reflection on the events that took place in the Garden of Eden provide some understanding to the strategy of the Devil. In the Garden, God, in the person of the pre-incarnate Christ, cast down the serpent, “… On your belly you shall go, And you shall eat dust All the days of your life.” (Gen. 3:14). This not only demonstrated His power over Satan, it symbolically  re-enforced the truth that this most powerful of fallen angels was, and ever would be, the ‘cast down’ one.
Similarly, Moses, who in Israel’s eyes was their first Messiah, in  preparation for the exodus from Egypt, re-enacted this same scene by casting down the serpent-rod, re-affirming the continuing power and authority of God over Satan. This was the prelude to the defeat         of Satan’s instrument Pharaoh, whose tiara of authority carried a  representation of a serpent.
The ministry of the ‘seed of the woman’ (Gen.3:15), Jesus, must demonstrate this same power and authority, and climax in the prophesied ‘bruising’ of the serpent’s head. However, this enemy is  no weak vessel. He has position and power and is a consummate   tactician with an overall strategy that can be summed up in a phrase, deception with a view to destruction’. It had always been his ‘modus operandi’. Jesus referred to the element of deception when He said to the Jews, “You are of your father the devil, and the desires of your  father you want to do … When he speaks a lie, he speaks from his own resources, for he is a liar and the father of it” (John 8:44).  We are warned of the “wiles of the devil” (Eph.6:11).  His followers are “deceitful workers, transforming themselves into apostles of Christ. And no wonder! For Satan himself transforms himself into an angel of light” (2 Cor.11:13,14). Deception, beguilement, bluff and subterfuge and even camouflage are used by the Devil to accomplish his evil  purposes.
However, deception was simply a means to destruction.  Not only is he the father of lies but also a “murderer from the beginning” (John 8:44). He is the Adversary, “a roaring lion”  who goes about “seeking whom he may devour” (1 Pet.5:8). It was this deceiver, in the ‘one to one’, ‘face to face’ confrontation with the incarnate God, who attempted to cloud the issue and misdirect the Messiah into taking the position of the one ‘cast down’. Satan took Jesus up a very high mountain, showed Him all the splendour of the kingdoms of the world, and said, “All these things I will give You if You will fall down and worship me” (Matt.4:8,9; Luke 4:5,6). It was inevitable that Satan would couch this temptation in terms that reflected the cause of his own downfall - personal ambition running counter to the will of God. Here, he tries to recover all lost ground with one throw of the dice.  What he had failed to do when he was the mighty, covering cherub, he tried to accomplish when the God that defeated him there was clothed in flesh. Jesus, weak with hunger, with limited resources refused the offer and put His finger on the crux of the  matter: “Away with you, Satan! For it is written, You shall worship the Lord your God, and Him only you shall serve” (Matt.4:10).     Jesus   rejected the offer of kingdoms, power and glory; and later reminded His followers that, “the kingdom, and the power and the glory” (Matt.6:13) eternally belong to the Father.
Posted by Mountjoy at 8:34 PM 0 comments

The Life of the Messiah


Clearly, it was not possible that Jesus could enter on His Messianic mission without opposition, and for Him that opposition would come from God’s ancient enemy, Satan. The Spirit of God put Jesus in harm’s way by pressing Him to an area where there would be no food and no help. No ‘manna in the  wilderness’ for Him. Nevertheless, He was able to meditate upon Israel’s wilderness   experience and understand that only reliance on God would get Him through as it did in getting Israel to Canaan. Indeed, this very thought would be His defence against the first temptation.

The Life of the Messiah (Continued)

Jesus in the Wilderness (His Baptism) 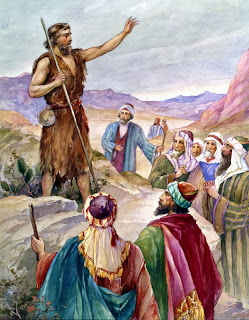 When the day arrived for Him to be revealed to Israel as their Messiah He left the family home and His workplace for the last  time and went out into the wilderness, along with many other Israelites to be baptised of John. Not for the same  purpose as them for He    needed no baptism of repentance as John’s initial reaction revealed, for “John tried to   prevent Him, saying, “I need to be  baptized by You, and are You coming to me?” (Matt. 3:14) However, He had been led of the  Spirit to  be baptised by John for several reasons.


The first was to signify the acceptance of His Messianic mission, for the only hope for these repentant sinners that John was baptising was for Jesus to die in their place. This meant His identification with them, and this He did by joining them in John’s baptism.


The Scripture also makes us aware that Jesus, who had fully embraced the limitations of the incarnation was strengthened in His mission when He received confirmation that taking on the form of man did not limit His relationship with His Father. The Father’s voice testified: “This is My beloved Son, in whom I am well pleased.” (Matt. 3:17)


A third reason for the baptism was it presented the perfect opportunity for John to be reassured regarding his own ministry and identify Jesus as the ‘greater’ who was to follow Him. “I did not know Him,  but  He  who  sent  me  to  baptize  with  water said to me, ‘Upon whom you see the Spirit descending, and remaining on Him, this is He who baptizes with the Holy Spirit.’ And I have seen and testified that this is the Son of God.” (John 1:33–34)
In addition, the Spirit of God used the baptism to signify a break   between the private life of Jesus and His new public life as Messiah. But that new public life could not begin until His diabolical foe was confronted and resisted. The Spirit of God having descended on him in the form of a dove, soon ‘drove’ Him further into  the wilderness, into a more inhospitable region, to be tempted of the Devil (Mark 1:12) and there to defend His recently  confirmed status of ‘Son of God’.
Next Time: His Temptation

Posted by Mountjoy at 5:25 PM 0 comments