Torah Observance in the Age of Grace


This book seeks to answer the question: ‘what is the place of the Mosaic Covenant (often referred to as ‘the law of Moses’) in the age of the New Covenant?’ 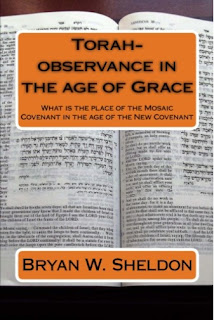 There are many that recognize the importance of the ritual of Israel and the contribution it made to the education of the Hebrew nation - how it was designed to prepare them for the coming of their Messiah. His coming should have changed everything for them. Alas they rejected their Messiah and the whole situation became more complicated.


With the loss of the Temple, the ritual of Israel ceased. Nevertheless, many of the Hebrew nation still try to celebrate the feasts and abide by the Torah even though the instruments of Law have disappeared. Some among the Christian Messianic community and some Gentile believers who treasure the Jewishness of Christianity are also drawn to the old rituals. All recognize they cannot perform them as they should – nevertheless they seek to celebrate the Passover once a year and build booths for the festival of Tabernacles. In the light of Scripture how is this to be viewed? This enquiry, of course, is not whether Jews should abandon their culture, just that, should the rituals prescribed in the Torah still be practiced.
It is not as if this question is not Scriptural: It was faced head on by Paul, an apostle and theologian, who was trained in the Rabbinic schools as well as being divinely instructed. The subject was also debated at length in the early Church – indeed we have the result of their deliberations recorded for us. In addition, we have a letter (Hebrews) which is addressed directly to Jewish Christians with clear advice as to the place of Mosaic ritual in this day of grace. Moreover, Paul, the Jerusalem Council and the writer to the Hebrew believers dealt with the subject while the Temple was still standing, and so did not have the additional difficulties that would be faced by those who wish to celebrate the Feasts today.


What we are suggesting is that, as always, the Bible can give us the answer.
The questions raised could be summarized thus:


Drawing on the teaching provided by that part of the Bible called ‘The New Covenant’ the author offers a Biblical response to these questions.
This book is available from Amazon - either paperback or on Kindle.
Posted by Mountjoy at 8:05 PM