Nebuchadnezzar has a dream

Nebuchadnezzar dreamed a dream – a dream of some importance – a dream from the Lord. The most powerful man in the world is not protected from the voice of God. Realising he has dreamed a dream of undoubted significance Nebuchadnezzar devised a test. Since Babylon was full of idols and deities, and he was supporting a whole host of officials and servants allied to these gods, he decided to ask them to supply the dream, and then interpret it. Failure to supply and interpret the dream carried the death sentence. Many complained that Nebuchadnezzar was being unreasonable, but they could not prevail. Execution orders were issued. Then Daniel stepped forward. He committed himself, in the name of Jehovah, to tell the dream and the interpretation. Nebuchadnezzar and all Babylon were going to be confronted with unanswerable proof that only Israel’s God was real, sovereign and limitless in His wisdom and power.
But first Daniel called a prayer meeting – for himself and his three Hebrew friends. We are not told the content of Daniel’s prayer, but we do see his confidence that the information received was accurate when we read of his prayer of thanksgiving: “Blessed be the name of God forever and ever, For wisdom and might are His. And He changes the times and the seasons; He removes kings and raises up kings; He gives wisdom to the wise And knowledge to those who have understanding. He reveals deep and secret things; He knows what is in the darkness, And light dwells with Him. “I thank You and praise You, O God of my fathers; You have given me wisdom and might, And have now made known to me what we asked of You, For You have made known to us the king’s demand.” ” (Dan. 2:20–23) 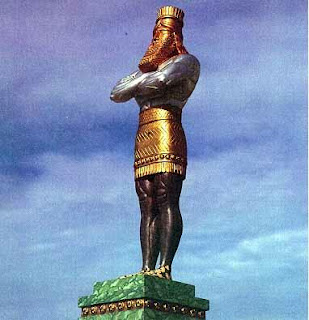 Armed with munitions from above, Daniel spoke to the king. Daniel asserted that since Jehovah gave the dream, only Jehovah could provide the interpretation. The dream was of a statue (perhaps an idol) which was mostly made of metal. It had a head of gold, chest and arms of silver, stomach and thighs of bronze, legs of iron and feet of iron and clay. In the dream a stone quarried out of a mountain struck the image on its feet, and the image disintegrated and turned to dust. The dust was then carried away by the wind. The dream was a prophecy, and demonstrated (i) God’s wisdom (it laid out God’s programme for the nations), and (ii) His power (He will bring it to pass). It was another example of the clear message of the book - the sovereignty of God: ‘… the Most High God rules in the kingdom of men, and appoints over it whomever He chooses’ (5:21).
The dream told of the deterioration of future dynasties until earth’s wisdom and power would have lost all worth. Only at that time would Messiah come. The ability of Daniel to receive and relay from heaven future world events to the Babylonian monarch produced a remarkable confession. Nebuchadnezzar admitted: “Truly your God is the God of gods, the Lord of kings, and a revealer of secrets, since you could reveal this secret” (2:47). Daniel and his friends were promoted, and began a ministry that was designed to establish one main truth to Nebuchadnezzar, Belshazzar, Cyrus, and Darius – the truth that Jehovah is on the throne of world affairs - ‘our God reigns’.
Babylon will try to intimidate you 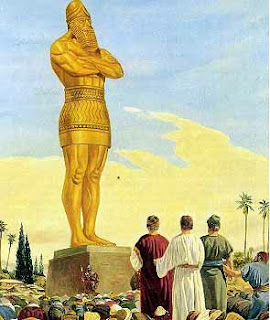 Chapter three of Daniel records the tightening of the tension between Babylon and the faithful Israelites. Mainly it was a clash of cultures – a conflict between the idolatry of Babylon and Israel’s monotheistic culture that forbade idolatry. Perhaps with memory of his significant dream, Nebuchadnezzar erected a huge statue overlaid with gold, ninety feet high and nine feet wide. The image, the height of a seven or eight story building, was clearly designed to impress. But it also had a second purpose; it was also designed to unify the multinational peoples of the empire, both politically and religiously. The opening ceremony in the capital city of the empire was given a musical setting by the Babylonian state orchestra. Nebuchadnezzar demanded a public demonstration of complete loyalty to himself and his patron god, Nabu. This would be evidenced by a public ceremony when all people were commanded to fall down before the idol and worship. The pledge of allegiance to Nabu would amount to a pledge of allegiance to his viceroy, Nabu-kudurriusur, that is, Nebuchadnezzar himself. The population was expected to give complete obedience. Failure to worship the idol carried the death sentence.
But when the music sounded and heads touched the ground there were three men still standing. The three who refused to acknowledge the golden image and offer obeisance were Hananiah, Mishael and Azariah. Israel was in captivity because of its tendency to worship idols, but here were three of its young men prepared to stand alone, even to die, before bowing down before the Babylonian image. The three Israelites were brought before Nebuchadnezzar and given a further opportunity to obey the edict and worship the image. But they loved Jehovah more than life itself, and refused. They defied Nebuchadnezzar with courtesy. On the other hand Nebuchadnezzar derided Jehovah with the words, “who is the god who will deliver you from my hands?” (Dan. 3:15)
Now in this serious, life threatening experience, the benefit of their previous training came to their aid. The discipline of body, mind and spirit would now be of supreme importance in their survival. They responded, “O Nebuchadnezzar, we have no need to answer you in this matter. If that is the case, our God whom we serve is able to deliver us from the burning fiery furnace, and He will deliver us from your hand, O king. But if not, let it be known to you, O king, that we do not serve your gods, nor will we worship the gold image which you have set up” (Dan. 3:16–18). Such a refusal, including as it does the implication that the God of the Hebrews could protect them from the flames, incensed Nebuchadnezzar and the execution order was issued. The furnace was fed with fuel and the heat increased until the Chaldean officials were satisfied that the death of the Hebrew rebels was certain. But then something happened that no-one had anticipated. Although they were cast into the fire they survived with the help of a mysterious fourth person. When commanded, they climbed out of the furnace, but not the fourth who disappeared. They had suffered no harm and the fire had had no effect. Jehovah had indeed been able to deliver them from the furnace.
The lesson is obvious – in Babylon the Just must live by faith. Coming face to face with an undoubted miracle, Nebuchadnezzar declared: “Blessed be the God of Shadrach, Meshach, and Abed-Nego, who sent His Angel and delivered His servants who trusted in Him, and they have frustrated the king’s word, and yielded their bodies, that they should not serve nor worship any god except their own God! Therefore I make a decree that any people, nation, or language which speaks anything amiss against the God of Shadrach, Meshach, and Abed-Nego shall be cut in pieces, and their houses shall be made an ash heap; because there is no other God who can deliver like this” (Dan 3:28,29).
So the wisdom of God had been validated when Daniel had previously interpreted the king’s dream, and the power of God had been validated when the hottest fire that man could generate could not affect His servants – our God reigns!
Posted by Mountjoy at 12:44 PM